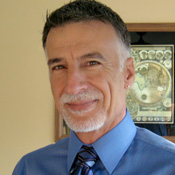 BOC graduate Paul Caron always seems to be moving forward. After high school, Caron trained to be a master electrician, both at vocational school and in the U.S. Army, eventually starting his own electrical services business and then branching out into the data and telecom sectors. Always up for a challenge and with a strong background in “making things work” Caron eventually moved into facilities management, first as director of facilities at Clover Health Care/Continuum in Auburn and then in the K-12 education sector in both the Lewiston and Brunswick school districts.

In talking with Caron, his enthusiasm for his work highlights the obvious facts that he 1) likes to learn, 2) relishes a challenge, and 3) combines #1 and #2 to make things happen. As he states on his informational blog, “I have enjoyed working as a facilities & project director for the past ten years and my skills have continued to expand and adapt along the way with special focus on energy, security, and budget reductions.”

Caron is both a BOC level I and level II graduate and has a great appreciation for the training. “A lot of light bulbs went off in BOC. As they talk about different aspects of building management, things start to gel and you see more associations and dependencies. You look for alternative ways of doing things that ‘fit’ your buildings and locations,“ he states. And his projects have indeed investigated interesting alternatives.

When at Lewiston School District as director of facilities and projects, Caron was tasked with determining the best method for revamping the lighting systems at two of the existing elementary schools, as well as investigating the best options for two new high-performance elementary schools. “Nowadays, I’m all about control versus equipment – controls and measurement,” says Caron. He looked into daylight harvesting options. The lighting controls system they chose to use seemed an expensive option initially, but the savings, which came in at better than 60% (as measured at the first school retrofitted on a 20-day cycle by Efficiency Maine, a long-time BOC program sponsor), were undeniable. The vendor estimate had been about 50%.

It might seem counterintuitive that Maine could be a location ripe for daylight harvesting, but Caron explains. “So much depends on the situation of the rooms, how much light they actually get, and how and when the space is being used. Sun coming into the classrooms at a lower angle means that more natural light is actually available. The sensors in the system can adjust to the level of light needed, which consistently cuts energy use.”

Now facilities director at the Brunswick School Department, Caron’s latest challenge is a geothermal energy system at the Harriet Beecher Stowe Elementary School. A big proponent of Peter Drucker’s philosophy, “What gets measured, get managed,” Caron recognizes that while geothermal energy in the ground is free, there’s certainly a cost to getting it out! Since the system was just deployed in the fall of 2011, hard savings numbers cannot be gleaned. And the question would also be, how would you measure the savings of the system against the resources being used to harvest the geothermal energy? The various components of the geothermal extraction process would have to be measured separately. He concentrated on the HVAC system for measurement, since HVAC savings and picked the brains of people in the field to see what he could come up with to do this. Results of his ingenuity to “measure and manage” can be seen on the facilities page of the Brunswick School Department site. Each component is tracked individually to determine how much electricity is actually used and what it then, costs to create geothermal electricity, giving a measure of how sustainable the “free” energy will eventually be.

“I believe that checking the system throughout an entire year would yield the most useful information, but just started posting results in February, measuring at six-minute intervals. So while we know we’re saving money and energy, the whole picture is not yet clearly measureable. But it’s very exciting,” notes Caron.

As Caron says above, BOC training turned on some light bulbs and got him thinking about possibilities he hadn’t considered. Another advantage of the training he sees is that class attendees come from a variety of backgrounds and that it is useful to bounce information and ideas around – just to see what people were doing in their own buildings and how they were solving their particular problems. Efficiency Maine’s Program Manager Tim Vrabel considers Caron to be one of best facilities managers in the state and certainly, the strides Caron has made at both Lewiston and Brunswick are impressive. Somehow you just wonder what he’ll think of next!