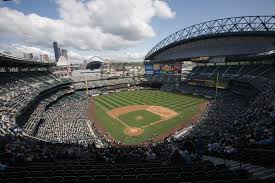 Safeco Field, home of the Seattle Mariners and host to Seattle BOC courses in 2014 and 2015, has announced that it will become the first Major League Baseball stadium to light its field using LED lighting technology.

The following information was shared on The Mariner’s website and was written by MLB reporter Greg Johns.

SEATTLE — While expectations are already high for 2015, the Mariners plan to literally cast a new light on their upcoming season as the club announced Tuesday that Safeco Field will be the first Major League stadium to illuminate its playing field with LED lights.

LED (light emitting diode) uses multiple narrow beams of light to produce a brighter and more uniform illumination than the former metal halide fixtures. Installation of the new lighting system was completed this month at Safeco and will be unveiled to the public at the team’s 17th annual FanFest on Saturday and Sunday.

The club says the LED lighting will significantly reduce glare and shadows on the field and create a better atmosphere for both players and fans, as well as better color and no flicker on the slow-motion technology for viewers watching games on HDTV.

“Thus far, our experience has indicated that the Mariners new LED technology at Safeco Field will be better for our players, fans in the ballpark and viewers watching at home,” said Joe Garagiola, Jr., senior vice president of standards and on-field operations for Major League Baseball. “We applaud the Mariners for an innovative step that promises to improve efficiency and the fan experience in numerous ways, all while serving as a welcome addition to our overall greening efforts.”

In addition to the improved lighting, LED fixtures are more efficient and have a longer lifespan than metal halide lamps. Safeco Field’s LED conversion will reduce energy consumption for field lighting by 60 to 70 percent.

The LED lamps last over 100,000 hours, or more than 30 years, compared to about 3,000 hours for metal halide lamps. And unlike the old lights, which needed a 20-minute warmup, LED lights respond instantly when switched on.

“The benefits of converting to LED lighting are across the board from the play on the field to supporting the Mariners’ long-established sustainability goals,” said Joe Myhra, Mariners vice president of ballpark operations. “This project was the result of the work of many partners, including Planled and KMW, working together on this new approach to sports lighting.”

John Hwang, the CEO of Planled, the company that partnered with the Mariners on the project, called it “the most advanced lighting system in sports history.”

Planled is producing a video that documents the project from the beginning to serve as a resource for others who are interested in learning more about the use of LED lighting.

Several NFL facilities — the Houston Texans’ NRG Stadium and the Arizona Cardinals’ University of Phoenix Stadium, which is hosting the Super Bowl on Feb. 1 — have converted to LED lighting, as has the Staples Center in Los Angeles.

• 579 metal halide lights were replaced with 578 GigaTera SUFA LED fixtures.
• The metal halide lights ranged from 1,000-2,000 watts.
• The LED fixtures use only 800 watts.
• The LED lights are 20-30 percent brighter while using 60 percent fewer watts than metal halide lights.
• The more efficient LED lights will reduce power usage by 784,000 kWh each season, saving more than $50,000 in energy costs alone.
• Because LED lights last longer, there are also savings in maintenance costs over the life of the fixtures.
• Sun light registers 100 on the Color Rendering Index. Metal halide fixtures register 63, and LED lights are at 81, making for dramatic improvements in visibility for players on the field, fans in the stands and those watching at home on TV.
• The GigaTera system is the first in MLB to offer ultra-slow motion replay without any flicker.

Chris Hunsaker, lead HVAC technician at Safeco has attended BOC and was instrumental in bringing the BOC to Safeco. Watch his testimonial on the program’s benefits here.